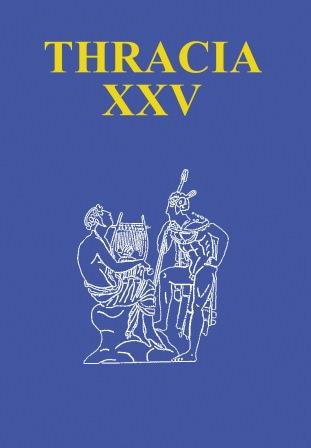 Summary/Abstract: The exposition analyzes the semantics of Thracian vessels of precious metal; an attempt was made to discuss their function in the context of sacred mysterious logos; a reinterpretation of the ritual symposial practices characteristic of the Orphic communities of Thracian political elites is proposed. Precisely because of their sacred functions, vessels of precious metal with inscriptions are found in the funerals and treasures of the aristocratic elite. They function in a certain way in the symposium rituals during the ruler’s symposia, and such practices in Thrace, are part of the Orphic religion and are associated with aristocratic political elites. There are several reasons for this topic: There is discussion in the literature and there is still a lack of a systematic and consistent thesis about the function of precious metal vessels in the Thracian cultural model. Despite the fundamental research of Al. Foul, the connection between the Thracian basic model of Orphism as aristocratic ideology and its projections in artifacts and folk narratives has not yet been sought. No effort was made to illuminate the function of the Thracian sacral artifacts in parallel with the Greek orphic sources.