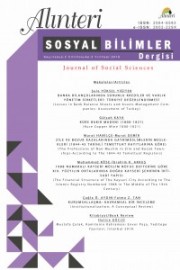 Summary/Abstract: The very first census started to be made during Mahmud II period. The recordings which started in 1831 completed in nearly all parts over the country when it was in 1844. In these registers which had made military-aimed, just male recordings were made. Besides, in the population register there are some important details such as the governmental, social and economic situation of the region. Hence, in most of the book, beside the father of the family, the occupational state of some other residents who profess any other job are indicated. The 1988 numbered and 29 Z. 1246 dated Kayseri population register, which is the main source of this study, is a detailed book consisted of 139 pages. The mentioned population register talks about 85 quarters in Kayseri city centre in which Muslims live. In the recordings, in which the male population of Muslims living in Kayseri city centre in 1831 is recorded, some important information is included such as people’s names, physical appearances, titles, nicknames, jobs and migration situations. The register, which recorded nearly all the jobs which the fathers of the families profess, is remarkably important. Professing jobs such as masjid attendant, herald, coffeehouse keeper, labourer, carrier, saltpetrer, merchant, farmer, grocer, smith and a lot more professions alongside administrative (like mukhtar), religious (like imam, muezzin, mudarris) and military jobs (like reserves, regulars, corporals) demonstrates the diversity and liveliness of the commercial, economic and social life in Kayseri. In this study we will show this diversity and richness of jobs in Kayseri under the light of the 1831 dated, 1988 numbered population register of Muslims in Kayseri.