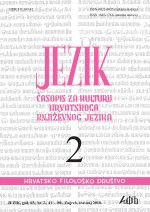 Summary/Abstract: Languages, particularly less frequently spoken ones and those that could be described as ˝new˝, are confirmed, together with the culture that they promulgate, through the context of otherness, i.e. the prism through which their identities are recognised (and acknowledged) from the outside. Both Croatian and Macedonian can be described as ˝small˝, i.e. less widespread languages and, although Croatian may still be occasionally regarded as a ˝new˝ language in a certain sense, they are both characterised by a pre-standard and standard historicity. The aim of this paper is to present the results of a poll conducted among speakers of Macedonian, i.e. Macedonian students of the ˝Blaže Koneski˝ Faculty who had, at the time of the conduction of the poll, started attending lessons in the elective course Croatian Language 1. The poll encompassed two aspects: the first pertained to issues relating to the Croatian language, the second – in light of the importance of the component of culture both for the acquisition and the selection of a particular language – included questions on Croatian culture. More specifically, the study focused on the students’ motivations for selecting this course, their self-evaluation of their proficiency in Croatian and their basic knowledge or views related to Croatia and the Croatian language, while also gathering students’ associations on Croatia and distinguished Croats and students’ habits relating to the consumption of Croatian media. Finally, their ability of distinguishing between Croatian and Serbian (the latter of which is geographically more proximate to the students) was tested on the example of several sentences. The conclusion was that Macedonian students, owing to their occasional consumption of Croatian media, are largely informed on basic facts pertaining to Croatia, and that their views of Croatia are largely positive, though stereotypical. The students’ knowledge of Croatian is quite good and, although they all agree on Croatian being a distinct language from Serbian, they are unaware of some of the differences between the two, which comes as no surprise. Such positive views most likely had contributed to the students opting for Croatian as their foreign language of choice.