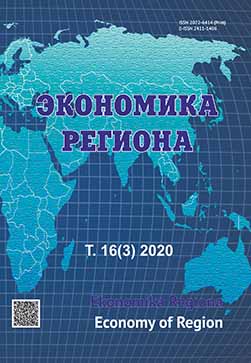 Summary/Abstract: At the present stage, urban economists widely use Zipf ’s law to assess the urban regional and national systems. Zipf ’s law or the rank–size rule is a pattern linking the population of a city with its place in the hierarchy of cities arranged in descending order depending on their size. Using Zipf ’s law, the study aims to analyse the uniformity of the distribution of population, employees, enterprises and organisations in Russian cities. The research is based on the data of the Federal State Statistics Service. We selected a sample of cities from each Federal District and Russia as a whole. The sample included settlements with the status cities and more than 100 thousand inhabitants in 2016. The maximum values of the Zipf coefficient were calculated for the indicators “population size” and “average annual number of employees of enterprises”. Regarding the Federal Districts, the estimated Zipf coefficients ranges from 0.5 to 0.9 in terms of the population size; from 0.4 to 0.8 in terms of the average annual number of the employees of enterprises; from 0.4 to 0.8 in terms of the number of enterprises and organisations. For reducing the identified interregional differentiation in the Federal Districts of Russia, we advise to develop small and medium cities. Further research should focus on the application of Zipf ’s law to create a method for determining the optimal size of a city in a territorial space.