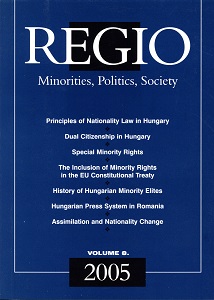 Summary/Abstract: The present study summarises the outcome of earlier sociological and demographic surveys on the assimilation processes of Hungarians living in Slovakia. It aims to reconsider the results of such recent surveys according to the accepted co-ordinates of social sciences and place them into a unified theoretical structure. The results of censuses conducted around 2000 in the countries neighbouring Hungary, and the ensuing discourse, call our attention to some important developments and changes. Among others, the theoretical-methodological aspects of assimilation and nationality change have come to the foreground. This increasing interest creates an opportunity for the concept of assimilation to be cleared from all the residua which it has accumulated – partly as a result of lack of data characteristic from previous decades and partly due to uncertain, misty and careless usage of concepts. In the course of analysing the etno-sociological and ethno-demographical processes of recent years, a close scientific study of these concepts has become inevitable.