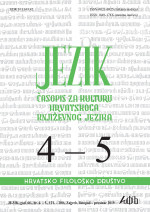 Summary/Abstract: Hašek is a Croatian on-line spellchecker that continuously operates since March 21, 1994, nowadays at the address https://ispravi.me/. In 25 years of functioning Hašek processed nearly 30 million texts, which build a corpus of more than 7 billion tokens. By comparison, all books ever published in Croatian form a corpus with less than 20 billion tokens. As a WWW-embedded tool, Hašek took advantage of many web-based services including learning. Thanks to Hašek’s learning capability, its dictionary increased from initial 100 thousand to more than 2 million word-types. Another aspect of learning was the creating and regular updating of the Croatian n-gram system. Unlike Google, whose n-gram systems are based on the WaC (Web as Corpus) approach and cut-off criteria, Croatian n-grams were extracted from processed texts by a lexical criterion: each n-gram constituent must be proven by the spellchecker as valid in Croatian spelling. The difference in approaches made Croatian n-gram system comparable in size to the largest Google n-gram systems. Unfortunately, the advantages of on-line spellchecking for rapid breakthroughs into much more sophisticated language technology areas were not recognized by Croatian decision makers, with some consequences mentioned in the paper.