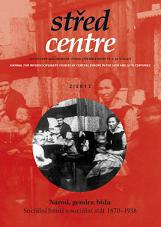 Summary/Abstract: Historians have not appreciated the full signifi cance of the Habsburg Austrian campaign for universal male suff rage in parliamentary elections, which culminated in immense street demonstrations in 1905 and the legislation of electoral reform in 1907. Th is applies above all to the Austrian Social Democratic movement that played a central role in the campaign in 1905–1907, emerged as the biggest victor in the reformed 1907 parliamentary elections, and fragmented along ethno-national lines several years later. What is particularly missing in the literature is an understanding of the specifi c ways in which democratization furthered ethnic nationalism among socialist workers. On the basis of original research on the Czech socialist movement between 1890 and 1914, this article seeks to provide a better understanding of democracy’s nationalizing eff ect. First, it reveals the utopian and messianic meaning that the campaign for universal voting rights increasingly possessed for ordinary members of the workers’ movement and for its leaders. Th e existing literature on this topic has not adequately highlighted the link between pre-1914 Austrian socialism’s redemptive ethos and issue of electoral reform. Second, it illuminates a profound social-psychological shift in socialist workers’ attitudes toward the ethnic nation that accompanied the ultimately successful socialist campaign for electoral reform—a shift from a sense of exclusion to one of rightful leadership. By not engaging directly with workingclass political discourse or by assuming that nationalism could only enter the workers’ movement from outside, historians have missed this shift. Th ird, this paper illuminates the rhetoric and popularity of socialist leader František Soukup, whose meteoric rise in 1905–1907 testifi es to the broad resonance of the more nationalist direction in Social Democracy among the rank and file