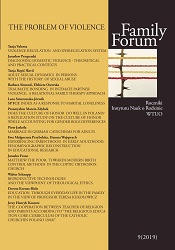 Summary/Abstract: This paper deals with the issue of honor culture in Poland. In a traditional honor culture, honorable men should be sensitive to situations where their honor is defiled. They should also be ready to defend their good name (Cohen and Nisbett, 1997), even if it means using violence. In such a culture women cannot actively defend their honor. The authors checked the gender role differences (both in actor and observer perspective) in attitudes towards honorable behaviors. The paper presents two experiments, analyzed with repeated ANOVA measures. In the first study, which is a replication of the research conducted by Szmajke (1999), men and women (N = 156) evaluated a letter written by an “honorable” killer and a “dishonorable” thief (in two gender versions). The second study (N = 146) replicated the results of the first one. The results confirm the traditional concept of the culture of honor as a permission for aggression used by men to defend their good name, in the eyes of both women and men. The use of violence by women in an analogous situation is evaluated negatively by both genders. Results show that the general gender roles in Polish culture of honor keeps men as active user of violence to respond for the provacation. Women are not allowed to active violent defend of their honor.