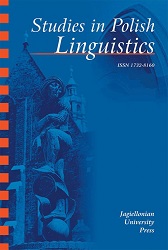 Summary/Abstract: The paper presents an analysis of three pronouns used to refer to a right-peripheral complement clause in Russian. It is demonstrated that two of them exhibit properties associated with expletives, which is unexpected at first sight, Russian being a (partial) null subject language. However, these pronouns are shown to have a discourse-related function rather than a syntactic one. The third pronoun under discussion, though used in the same grammatical context, turns out to be referential. The paper offers an account for this fact and proposes that the parameters that have proved to be relevant for differentiating expletives and non-expletives in Russian should be regarded as general criteria for expletiveness.