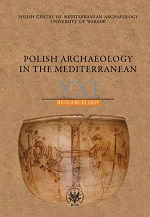 Summary/Abstract: Continued excavation concentrated on uncovering monastic architecture in the central and southern parts of Kom A: Buildings J, K and L and the monastic refuse dump from the 5th through 10th centuries. A hoard of Abbasid dinars and metal objects (lamps and polycandelion among them) were uncovered in the fill of a structure, which had burned down in a huge fire that consumed the central part of the monastic compound. The event was dated by coins to the middle of the 10th century. The refuse dump at the southern fringes of Kom A (Site B) functioned from the end of the 5th century to the 10th century. More graves of the 12th–early 13th century were uncovered in the southwestern part of the medieval cemetery on the main kom.