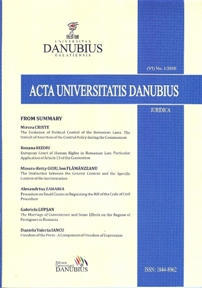 Summary/Abstract: In the context of EU extension, the main way to prevent and fight against crime of all kinds is represented by the intensification in the specific activities of judicial cooperation in criminal matters in all member states, based on a legislation anchored in the present realities. The most important form of judicial cooperation in criminal matters, based on mutual confidence in the decision taken by the competent judicial organisms is, in our opinion, the recognition and execution of foreign criminal decisions and judicial acts. One of the ways in which this type of cooperation is accomplished is represented by the mutual recognition and monitoring of suspended sentences, sentences with postponement of execution of the conviction, alternative penalties and decisions on probation, that have the purpose of increasing the chances for social reintegration of the convicted person. Recognizing and executing such an injunction in another member state than the one in which the conviction was established imposes, for the executing member state, the necessity of taking the most efficient measures for each singular case. The critical examination of the dispositions of the Council’s Decision Frame 2008/947/JAI, that regulates this procedure, as well as the special internal law leas to the conclusion of the existence of provisions that are at least debatable and the necessity of urgent transposition of the European normative act’s provisions in our internal legislation.