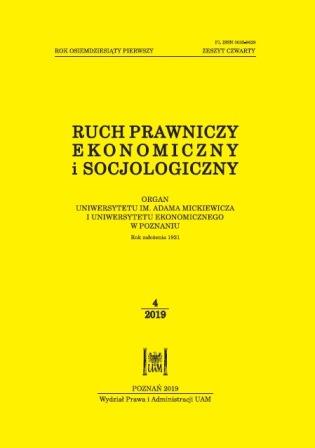 Summary/Abstract: According to the prevailing opinion, the period of time allowed for the acceptance or rejection of succession (Article 1015 para. 1 of the Civil Code) requires modification when the parents submit to the court a motion to be granted the permission to reject succession on a minor’s behalf (Article 101 para. 3 of the Family and Guardianship Code). There is a risk the Court may grant its permission after the lapse of the strict time limit and the minor would lose his or her right to reject the succession. To avoid such a situation, in the way of analogia legis, the provisions on limitation of claims or the provisions on transmission are applied to the period of the time allowed for acceptance or rejection of succession. The paper proves that Article 1015 para. 1 of the Civil Code is not burdened with the constructional loophole, therefore there are no reasons for applying analogia legis. The time limit may be preserved if the parents submit a motion to make the declaration to reject succession to the court. If they fail to do so and the time limit has lapsed, it is possible to avoid the legal consequences of a lack of declaration to reject succession in the time limit due to an error of law (Article 1019 para. 2 of the Civil Code).