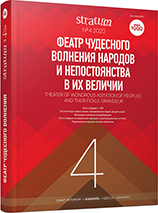 Summary/Abstract: The article analyzes the amphorae of the initial stage of the Mangup-Kale settlement (South-Western Crimea) in the second half of the 3rd—4th centuries. This category of vessels made it possible to reconstruct the time of development of the plateau territory as a result of population migration, the first trade contacts between plateau residents which grew into strong economic ties. Amphorae types 75, 77, 96—97 according to Zeest were delivered from the territory of the Bosporus. Amphorae types 72, 73 according to Zeest and MRA 5 Benghazi were products of the Bosporus, or the Aegean Sea Basin. Wares of MRA 7 and MRA 18 Benghazi types came from Kos and Chios, respectively. Vessels with high content of mica types MRA 3 Benghazi were produced in Asia Minor (Sardis). Light-clay amphorae with narrownecks of types D and F according to Shelov were products of Heraclea Pontica. At the first stage of the development of new territories, inhabitants of Mangup-Kale needed supply from the outside. The ancient trade ways were used to deliver the goods from the Bosporus. The proximity of such a large center as the Chersonese made it possible to provide themselves not only with goods of local production, but also to buy them in the city. In this way, Heraclean, Kosian and Chios wine along well-established sea trade routes were delivered to Chersonese, and from there by land to Mangup.