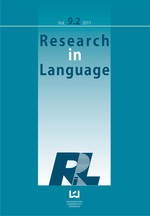 Summary/Abstract: This study considers the acquisition of epistemic modal auxiliaries (EMA) in typically developing (TD) and autistic children and the role that Theory of Mind (ToM) plays in this development. Nineteen Dutch-speaking TD children and ten autistic children received tasks assessing ToM, general linguistic ability and EMA comprehension. Results suggest that both groups have some understanding of the Dutch EMA system, but no significant differences were found between groups. However, once participants were divided into ToM passers and ToM failers irrespective of clinical diagnosis, results showed that passers performed significantly better than failers on EMA understanding. Having a good understanding of others’ mental states, as evidenced by full marks on ToM tasks, thus seems important in the acquisition of EMA.