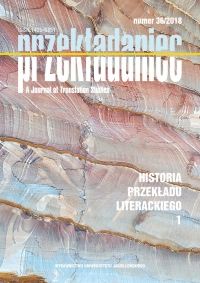 Summary/Abstract: The paper presents the Polish circulation of Katherine Mansfield’s poem To Stanislaw Wyspiański – the only piece of poetry written by Mansfield which was translated into Polish thus far. Written in 1910, the poem was translated three times: by Floryan Sobieniowski in 1910, by Beata Obertyńska in 1958 and by Zbigniew Lisowski in 1968. The analysis of contexts in which the Polish translations were created, published and republished, along with the interpretation of their paratexts, demonstrates that Polish recipients and the very translators were more interested in Wyspiański – the hero presented in the poem – than in Mansfield herself. Throughout decades, very little attention has been paid to the interpretation of the poem. Polish scholars and literary critics were interested in investigating the circumstances in which Mansfield encountered Polish culture in general and learnt about Wyspiański, the great artist from Kraków, in particular. Their convictions and beliefs can fruitfully be interpreted by the Translation History scholar as a sign of changes in the cultural and political situation in Poland. Moreover, the translators’ attitude – especially the one presented by Sobieniowski – can successfully be analyzed from the perspective of Translator Studies.