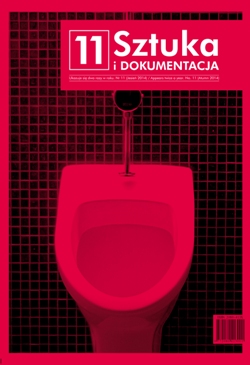 Summary/Abstract: The text is a critical discussion of Agnieszka Rejniak-Majewska’s book titled Puste miejsce po krytyce? Modernizm i materialistyczna rewizja autonomii sztuki (Łódź, 2014). With reference to this publication I point to and elaborate on its central issues: the re-evaluation and appreciation of aesthetic experience, the material substance of an artwork and the autonomy of art despite anti-aesthetic attitudes in the eighties and nineties. Rejniak-Majewska indicates certain changes by major critics (Foster, Buchloh) with regard to their positions on the material substance of art, as well as with regard to art and phenomena. She analyzes this in her chapters and she argues for the complexity of the often generalized aesthetic dimension of art and for its critical value. Another issue brought up in the title of the book, is the crisis of art-criticism, the clear-cut criteria of which disappeared along with the demise of the modernist criteria of aesthetic judgment. Whilst agreeing with the main thesis of the book, I also discuss recent publications by Rosalind Krauss who stresses the centrality of the issue of medium specifi city and Keith Moxey who, also signaling the necessity of combining the sensual (aesthetic) medium specifi c aspects of art with their theoretical and critical potential, seem to be to some degree in line with Rejniak-Majewska’s arguments but also complement them. While the Polish scholar in her chapters concentrates on diverse issues of art, aesthetics and art criticism in 20th Century, I argue that the applicability of medium specifi city and the material substance of artworks should also be measured against the contemporary. Moreover, the material/aesthetic substance of a work of art can be thought of in terms of an expanded fi eld negotiated by the work itself which provides a framework for the viewer’s diverse responses. In such a perspective, the meaning of ‘critical autonomy’ expands as a paradox for the autonomy of a work of art in its internal material substance and within the framework of its aesthetic experience, which is at the same time external, that is critically and theoretically productive.