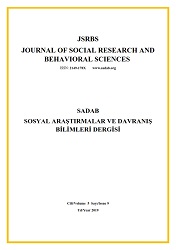 Summary/Abstract: Africa has been one of the most attractive targets for many countries throughout history. Especially, Africa's abundant mineral and natural resources have been a determining factor for foreigners' interests towards Africa. European countries have long tried to exploit the resources of Africa by establishing a colonial relationship. On the contrary, China has been dealing with economic and political relations with Africa since the 1950s. More recently, rapidly growing countries such as India and Brazil have also established closer relations with Africa. Although the interests of different countries seem similar, their historical trajectories and instruments of engagement with Africa may significantly diverge. For example, the European countries have abandoned colonial practices and institutionalized political economic relations based on agreements, programs, policies and initiatives.On the other hand, China's relatively shorter period of engagement with Africa has been based on attractive and lucrative investment funds and business projects. The aim of this work is to provide a comparison for China's and the European Union's political and economic relations with Africa. The comparison includes both similarities and differences. However, the paper does not claim to be exhaustive in encompassing all the aspects of the issues under consideration. The scope of the study is limited to the main issues addressed in the literature of this work.