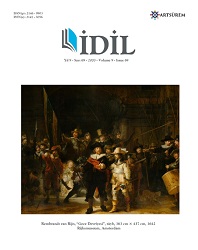 Summary/Abstract: The Ottoman Empire's domination in Europe brings along a great appreciation, admiration and respect to the Empire, together with the fear of the Turks. In the 18th century, travelers and traders from Eastern culture acquainted with Turkey and when they came back, the travel books they told about the ethnographic richness and traditions of the east caused a trend called Turquerie to emerge in a short time. With the first production of porcelain in Europe, the artists who discovered the characteristics of the porcelain, made elegant Turkish figures with fine workmanship, under the influence of the Turquerie movement. These figures, which started to be studied in Meissen (the first porcelain factory in Europe), have been inspired by the modelers of other established factories over time. These works, which generally deal with figures about Ottoman sultans, female sultans, and palace life that are examples of culture from past to present are exhibited in private collections, museums and auctions. In this article, after mentioning briefly the Turquerie movement, which is one of the reasons for the emergence of the figures, the porcelain factory, Meissen, where figures are produced most intensely and flawlessly in Europe and its modelers will be mentioned, and examples of Turkish figure production at porcelain factories that are rapidly spreading in Europe will be given. This study aims to underline how the art of ceramics was influenced by the judgements, way of thinking and aesthetics of the society in the context of its relationship with the collective subconscious, through exemplary works. The Turquerie movement, which emerged at the point where the East and the West touch one another, and the porcelain figurines, which are the reflection of Ottoman figures, are the inevitable results of this effect and interest.