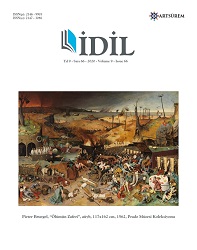 Summary/Abstract: Regarded as one of the fundamental characteristics of language by many linguists and partaking at the very front of factors that create polysemy are transfers of meaning. Transfers that are approached since old rhetorical studies as part of strong figures of speech, which provide impressive expression, are shaped in line with society's characteristics and trends. Transfers, which provide the word with a large number of meanings, are evaluated under the titles "Metaphor transfer" and "Name transfer". Metaphor transfer, name transfer are ways to transfer the mental imageries of language. The most common type of transfers in every language is metaphor transfer or metaphor. Name transfer is besides being psycholinguistic and a gradually comprehension of fact also a rhetorical skill. This study evaluates the transfers related to animal names of one of the Turkish dialects, the Bashkir Turkish, which has a strong expression in terms of nature and the concrete. The name transfer, which is defined as the explaining of a concept with a related or another linked concept, is defined as "metonimiya" in the Bashkir Turkish grammar. "Metonimiya", which is also evaluated as different naming or name change, counts as the shortest way for naming. In the grammar of Bashkir Turkish the metaphor transfer however is approached within polysemy under a sub-heading called "metafora" and evaluated in three groups, which are; "atama metaforlar (naming metaphors)", obrazlı metaforalar (living metaphors)”, “individual-sitilistik metaforalar (individual metaphors)”. The innovation in transfers is based on the production of something new with semantic clarity (relevance) by using a non-specific (non-eligible) characterization path. As long as we recognize the habitual use of the word and thereby the incompatibility (mismatch) demonstrated at the level of the literal interpretation of the sentence while passing through new semantic clarity and in a sense through its semantic depth, transfers will always stay alive. Semantic novelty can be connected to the imagination of the producer. The emergence of a new semantic clarity in transfers, beautifully shows what imagination, produced according to rules may be. When the Bashkir Turks, who express the plant known as honeysuckle "ayıw balanı (bear plant)", long plants without flower "quyan qŭlaq (rabbit ear)" and to beat around the bush "at qŭlŭnlatıw (to birth a horse)", and their imaginative transfers about animals are evaluated, we can see an emerging richness, which is also an indication of the richness of the cultural structure of society.