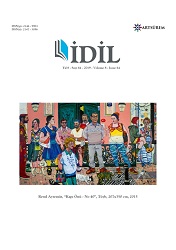 Summary/Abstract: Our eye, which performs the act of seeing, is our organ through which we come into contact with the outside world. We make the most of our connections with our environment through vision. The action of vision and perception depends on the figure-ground relationship, which varies according to the Gestalt principles. The eye, which is our vision organ, has been the subject of myths in the context of sight and seeing throughout human history and has even been used in the symbols that have attributed meanings by loading a mystical (mysterious in other words) mission. The all-seeing eye has existed in every culture and period. It is a symbol of vigilance and God's protective power in general. The evil eye is a kind of sinister that is used to counter this danger in the places where culture is common. The belief in the evil eye is particularly associated with eyesight. The evil eye talisman is one of the examples in this class. The all-seeing eye that protects the bearer from Evil, The Eye of Horus in Ancient Egypt, the Third Eye of Buddha in India, The Hand of mother Fatima, which is widely used in Turkey, Greece, North Africa, the Middle East and India, and the Blue evil eye talismans have been charged with the mission of protecting against evil eye. The image of the eye, which has become such a visual icon, has also been an important source of inspiration in Turkish ceramic art. In this article, the use of the symbolic meaning of the eye and the phenomenon of gaze in Turkish ceramic art has been examined and evaluated by examining the works of various artists. Recent ceramic artists studied in this study have used the eye symbol and the phenomenon of gaze referring to the evil eye, good luck, protection from evil; in other world, talismans, perception of the world and the sense of being gazed.