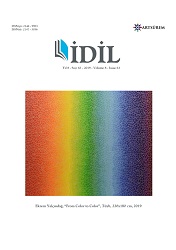 Summary/Abstract: In this study, the paradigm of art, which changes according to the scientific structure, is examined within the scope of bioart; In the 21st century, the examples of bioart applications in the arts have been discussed and explained. Nowadays, it is necessary to accept the current facts as to where art is on, what processes and parameters it is going on, and which reflections it will present on its journey. At the point where these human-centered changes in the biosphere have reached an unstoppable pace, art also needs to bring up the current scenarios, including interventions. In the paradigm of art, the depiction of extinction or re-existence in the anthropocene age we are in is depicted as the beginning of its most primitive form, and the ability to represent will continue to be reflected to humanity with the services of the artist in the context of the existing systems. Despite the developments in art in the global context, it is seen that interdisciplinary practices are not widespread in art education in our country today. Based on the necessity of updating the content of art education and integrating it with the data of the age; It was concluded with the opinion that the lack of bioart applications and the beginning of the researches will be started. In the documentary research, the biotechnological applications included in the field of bioart were explained with the artist and his creation. In the light of the data obtained, it was concluded that interdisciplinary studies in this field of design contribute to art.