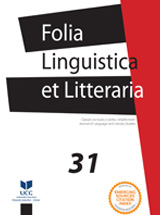 Summary/Abstract: The aim of this paper is to analyze the acts of returning home, thinking about home and the significance of home and returning home in Khaled Hosseini’s novels The Kite Runner, A Thousand Splendid Suns, and in the novel And the Mountains Echoed. As an American writer of Afghan origin, who left his home country as a child and moved to USA, Khaled Hosseini addresses the concepts of leaving home, immigration, and returning home in all of his published novels. In 2003, Khaled Hosseini published his first novel The Kite Runner. This story depicts the friendship between two Afghan boys, whose relationship is broken by the Afghan civil war and the violence before and in the aftermath of the war. In this novel, returning home is an act of redemption on behalf of Amir, for the betrayal of his best friend Hassan. Hosseini’s second novel, A Thousand Splendid Suns, describes the relationship between two women and their lives under the Taliban regime. Mariam’s and Laila’s life stories are intertwined the moment Laila, forced by the circumstances in Kabul during the civil war and the loss of her parents and her home, accepts Rasheed’s marriage proposal, becoming his second wife. The strained relationship between her and Mariam develops into close friendship, which ends the day Mariam kills Rasheed to protect Laila. Laila returns to Afghanistan and visits Mariam’s home. For her, this is an act of paying respect, of visiting a place where she can sense Mariam’s soul and her presence. And the Mountains Echoed presents the life stories of a number of characters, mutually connected in different ways. One of the sibling relationships described is the relationship between Pari and Abdullah who are separated as children. Pari, who leaves her home and is adopted, always feels the strange sensation of being homesick and missing somebody or something in her life. For Pari, who plans to travel to Afghanistan in attempt to find the answers to her questions, the act of returning home is exploring her own personality and heritage.