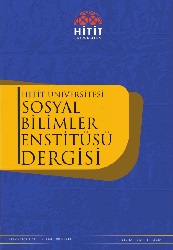 Summary/Abstract: The debates on civilization in the Ottoman Empire began after the proclaimed of the Tanzimat Edict (1839). The fact that these debates took place during this period was the result of the rapid modernization process that the Empire entered. The content of the discussions ranged from finding a Turkish term equivalent to the concept of civilization to the political, economic, social, cultural, and the everyday life of Europe effects on the Ottoman Empire. What was immediately visible and concrete in these discussions was the spread of the European lifestyle among the elite Ottomans. The Alla Franca dandy; A man who exaggerated and imitated Western culture and found Ottoman / Islamic culture inadequate, was extreme example of the aforementioned lifestyle with his clothes, the manufacturated goods he used, his attitudes and behaviours, especially the French-speaking in everyday life. The recognition of the Alla Franca dandy was first achieved through the novels that began to be written in the last quarter of the 19th century and later became a very common type in Ottoman literary narratives. In this study, we tried to carry out an analysis of the text of Medeniyyet Yani Sivilezasyon dated 1868, the author of which was not known, was one of the sources of Alla Franca dandy narratives written after him as first Alla Franca dandy narrative.