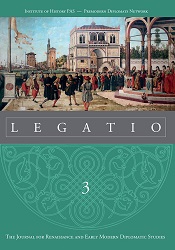 Summary/Abstract: This article examines two Dutch diplomatic missions, in 1627–28 and 1635, by which the United Provinces intervened in a Polish-Swedish armed conflict in Prussia. Th e focus is on ‘diplomatic poetics’: the ways in which literature functioned within diplomatic practice, and how that practice (or the ‘diplomatic moment’) was in turn envisioned in literature. Th e Polish-Swedish conflict was of great interest to the United Provinces, and was elaborately discussed in various Dutch media, as well as in the correspondences of merchants and politicians. The Dutch embassies to Polish territories themselves, meanwhile, inspired a number of literary works, published mostly in the Republic, but also in for example Danzig and Königsberg. These sources demonstrate how early modern literary and diplomatic practices in Europe overlapped and influenced each other. Firstly, German, French and Dutch poems by Johannes Plavius, Simon van Beaumont and Joost van den Vondel illustrate the blurring of the lines between the realms of diplomacy and literature. Poems could function as diplomatic gifts, enabling both personal, intellectual communication and the widespread transmission of political messages. Moreover, Latin and German plays by Johannes Narssius and Simon Dach, and more importantly Latin poems by Simon van Beaumont and Caspar Barlaeus, as well as an illustrated Dutch account of the first mission by Abraham Booth, reveal that the Dutch envoys featured in literary narratives as both wise peace bringers and travelling poets, and their missions to Poland as both arduous ordeals and epic adventures. Much like poetic gifts, these literary refl ections on ‘the diplomatic moment’ had public diplomatic agency, simultaneously voicing political opinions and crafting artistic images of the diplomats themselves.