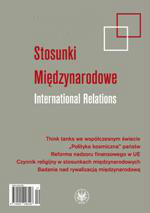 Summary/Abstract: In the post-Cold War period, one of the most important processes in the sphere of global security is the increasing privatization of violence. For more than a decade proliferation of the so-called private military companies (PMCs) has been among the main forms of this process. At the present time, such entities participate in the majority of armed conflicts, but their role and the manner in which they influence the situation are, as a rule, neither unquestionable nor easy to assess. This paper constitutes an attempt to make the definition of PMCs more precise, delineate the specific features of such entities and the market in which they operate, and present the key consequences of their development both in terms of the security of those states which avail themselves of their services and of the stability of the international system perceived globally. The paper reviews and assesses the prevalent definitions of the PMCs and presents the most frequently applied typologies of those entities. It also discusses the relationship between contemporary private military companies and the practices of the condottieri and mercenaries of earlier periods. In presenting specific features of the military services market, the author concentrates on the differences between private companies operating in that market in comparison to economic entities operating in other spheres of the economy; he also demonstrates the scale of this segment of the global economy and the dynamics of its growth. In the following section, the author correlates the increase in the PMCs’ activity to both international security and the national security of relevant states, presenting both the negative and the positive aspects and results of this process. Special attention is devoted to the issues of the states’ control over operations conducted by the PMCs, and the governments’ responsibility for their activities. The author distinguishes three aspects of this issue (political, economic and legal) and considers the relevant differences in the position of strong and weak states. Discussing the positive results of the development of the PMCs with regard to international security, the author focuses on the prospect of employing such entities in organizing international peacekeeping operations.