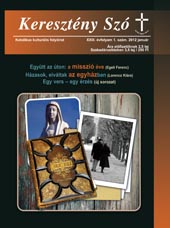 Summary/Abstract: The school theatre gives the opportunity to the pupils to become aware of the great theatre of the world. In a safe surrounding they can experience with and search for the adequate roles before stepping out in the real life and harsh circumstances. The problem has wide existential implications: school theatre gives the opportunity to get prepared for the future career. It also drafts the transcendent dimension and the gravity, but also the beauty of responsibility. Playing, role playing can help a child–who fears the enormous and threatening world–understand, know and come into its possession. As psychologists affirm, a child who is less used to verbalizing, can learn (about the world and him/herself) more through repeating, imitating. Role playing was fully used in school theatre within the Christian, Catholic schools worldwide, as well as in Transylvania. The performances had great success, the thematic chosen for the annual school theatre performance was carefully chosen according to the needs of the community. Thus, in Csíksomlyó passions were played with many Marian references in accordance with the needs of a Marian shrine. In Kanta plays were selected thinking of the religious education of a mixed population. In Kolozsvár the Jesuits wanted to attract the rich, later the Piarist Fathers wanted to have an even larger impact. From the end of the 19th century psychological research emerged and led to the founding of different psychological and pedagogical schools, some of which (psychotherapy, drama pedagogy, applied play theory, psychodrama) built into their theoretical frame the use of role playing.