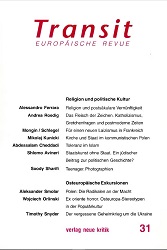 Summary/Abstract: In the following I would like to deal with some of the common stereotypes about Eastern Europe that popular culture (in varioous Western European countries) has produced. One immediately gets into the predicament that there is neither a clear and generally accepted definition of "popular culture" nor one of "Eastern Europe". Still, I think the subject is interesting enough to venture into this area of vague terms and unclear definitions.