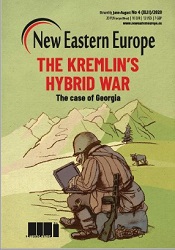 Summary/Abstract: Radicalisation, and in particular far-right radicalisation, is one of the most pressing issues in Georgia today. Recent developments, such as the mobilisation of far-right and conservative groups, have demonstrated the need to strengthen efforts to prevent radicalisation and to raise public awareness of the issue. The rise of the radical right threatens the country’s democratic development, its peace and the operation of state institutions. In fact, since 2012 we have only seen a growth in these groups in Georgia. The country’s society has proven to be fertile ground for far-right politics and the government’s tolerance only supports the strengthening of these groups’ influence in Georgian political life.