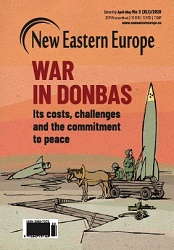 Summary/Abstract: It would be difficult to find a more telling symbol of Georgia’s continued political tensions than the green fabric that covers the fence surrounding the square around the Georgian parliament building and which has become a billboard for both anti- and pro-government graffiti. The fence was set up in January this year. Officially, it was explained that the fence was erected because of renovation works which were needed to fix the destroyed sections. Yet it is impossible not to have the impression it was meant to halt the continuation of protests that were taking place in front of the parliament.