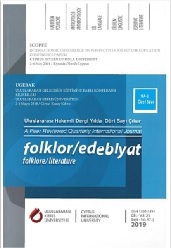 Summary/Abstract: The aim of this research is to investigate the awareness of the families about abuse. The families in the target of the research are the families who have children between 4-6 years old. This research was carried out as cross-sectional study. Personal Information Form developed by researchers and Parent Awareness Scale" developed by Pekdoğan (2017) were used as data collection tool. The population of the study was formed by the parents of children between the ages of 4 and 6 who received pre-school education in the Nicosia region. The sample consisted of 321 parents who were randomly sampled and voluntarily participated in the study. The data of the study were analyzed by SPSS 21.0 program. The relationship between the averages of parental abuse awareness scale and the socio-demographic characteristics of the study group were analyzed by t Test and one way ANOVA. For the reliability of the scale Cronbach Alpha was calculated as .65. As a result of the study, it was determined that the awareness level of abuse is medium level. When the scale items were analyzed, it was determined that the parents did not have enough knowledge about sexual abuse. The analyze results of the scales points that the families have medium level of awareness about child abuse. Also the results of the study indicates that the awareness about abuse is not connected with socio demographic issues. According to the results of the study family trainings about child abuse can be recommended.