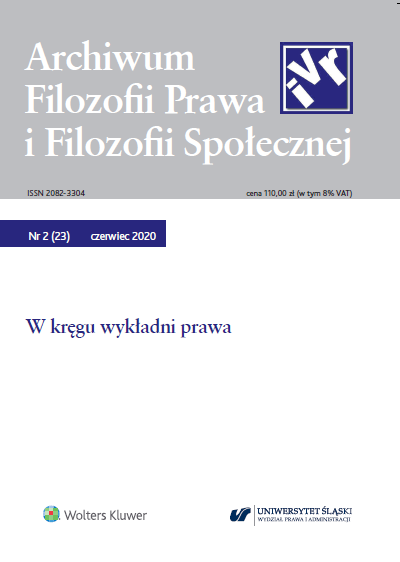 Wyrok Trybunału Sprawiedliwości Unii Europejskiej z perspektywy kognitywnej teorii prototypu. Studium przypadku
A Judgment of the Court of Justice of the European Union from the Perspective of Cognitive Theory of Prototypes: A Case Study

Summary/Abstract: Interpretative doubts in the application of law are usually born of discrepancies between the statutory language and the non-linguistic reality. Therefore, they pose the problem of categorization. The theory of law and legal practice have for centuries been dominated by the classical theory of categorization, according to which conceptual categories can be described by a set of sufficient and necessary features. In the 1970s, an American researcher Eleanor Rosch conducted a series of psychological experiments that led her to question the classical theory and lay the foundations for an alternative one, known as the prototype theory. According to this approach, conceptual categories are organized around the most typical exemplars (prototypes), and membership of a category is measured by similarity to the prototype. Some of the consequences of such view are that category membership is a gradable feature and that the borderlines of categories are fuzzy. The article presents an outline of the prototype theory in the version used in cognitive linguistics. Its usefulness for the theory and practice of statutory interpretation is tested on the basis of the judgment of the Court of Justice of the European Union regarding the concept of beer. In this judgment, the CJEU refused to define the concept of beer by setting requirements as to its raw material composition and ruled that beer is a product that has organoleptic characteristics of beer. This definition on the basis of classical theory appears to be tautological, however, it finds theoretical justification in the prototype theory. In conclusions, the author indicates research problems that must be taken up in order for the prototype theory to be reliably used in jurisprudence.