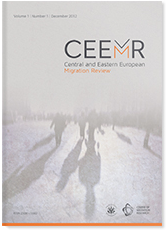 Summary/Abstract: This paper explores the ways in which young people aged 12 to 18 who were born in Central and EasternEuropean EU countries but now live in the United Kingdom construct their future imaginaries in the contextof Brexit. It reports on findings from a large-scale survey, focus groups and family case studies to bring anoriginal perspective on young migrants’ plans for the future, including mobility and citizenship plans, andconcerns over how Britain’s decision to leave the European Union might impact them. While most of theyoung people planned to stay in Britain for the immediate future, it was clear that Brexit had triggeredchanges to their long-term plans. These concerns were linked to uncertainties over access to education andthe labour market for EU nationals post-Brexit, the precarity of their legal status and their overall concernsover an increase in racism and xenophobia. While our young research participants expressed a strong senseof European identity, their imaginaries rarely featured ‘going back’ to their country of birth and insteadincluded narratives of moving on to more attractive, often unfamiliar, destinations. The reasons and dynamics behind these plans are discussed by drawing on theories of transnational belonging