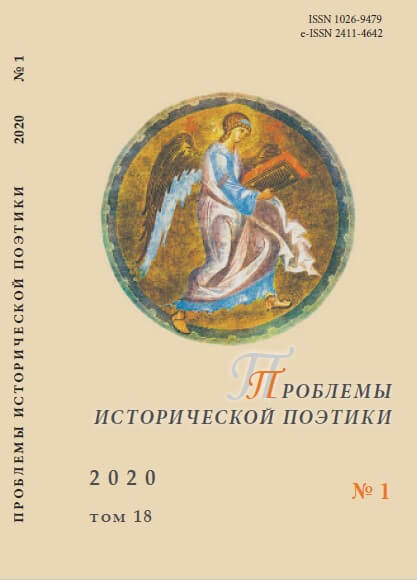 Summary/Abstract: The subject of this paper is the transformation of the poetics of Cupid and Psyche plot in its national and historical modifications in European literature. The methodology of the analysis is based on mythological studies (A. N. Veselovsky, A. F. Losev) and genre studies (M. M. Bakhtin, S. S. Averintsev, E. M. Meletinsky, etc.). Allegorization of the images of Love and Soul appeared in the antiquity long before the novel by Apuleius “Asinus aureus” or “Metamorphoses” (the 2nd century AD). In a Greek epigram Eros is often associated with the element of fire that puts the soul — “Psycho” — to a variety of ordeals and tortures. In “Metamorphoses” by Apuleius the tale about Cupid and Psyche can be seen as an allegorical narration about the soul traveling around the world and looking for ways to Love and eternal life. Later, the parabolic core of the ancient story was enriched with new motifs from the arsenal of mythology, Neoplatonism and Christianity. The archetypical basis and platonic paradigm of the plot in “Metamorphoses” by Apuleius go together in a syncretic unity, that provides universality and polysemy of the different versions of tales about Cupid and Psyche in European literature. The neoplatonic version of the story, which interprets the reunion between Cupid and Psyche as the Union of God and Soul, is represented in literature by writings of Fulgentius, Boccaccio, Heine, Coleridge, Żuławski and others.