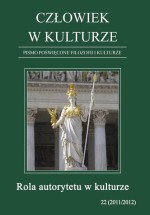 Summary/Abstract: The concept of authority, like the concepts of freedom, equality, and justice, seems to be one of those “great” and pervasive ideas which exercises an influence over the way we think about almost every other idea related to social, cultural, and political association. On the other hand, democracy tends to be suspicious of authority, because while democracy by its very nature tends to reduce all social relationships to the level of equality, authority essentially involves a division into a hierarchy which seems to offend some parts of the democratic spirit. The author, however, argues that authority is a necessary condition of any type of human freedom – the democratic freedom included, and that it is because of the necessary dependence of human freedom upon authority that the apparent conflict between freedom and authority arises.