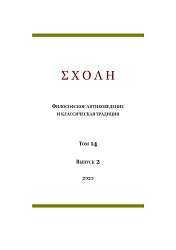 Author(s): Roman Svetlov
Subject(s): Epistemology, Ancient Philosphy, Existentialism, Analytic Philosophy
Published by: Новосибирский государственный университет
Keywords: Plato; the concept of dynamis; the principle of the irrational in the philosophy of Plato; the origins of academic skepticism;

Summary/Abstract: The «mathematical joke» from the Statesman is a good occasion for discussing the irrational in Plato's philosophy. This joke demonstrates that human nature is ungraspable in a rational way. Actually, the theme of human irrationality is present in a number of key-texts of Plato's anthropology. This topic is also important for other fundamental problems of his philosophy. The central word is «δύναμις», which is found in those texts of Plato, where he discusses the concepts of existence, knowledge, and the Form of the Good. The specificity of the using this word by Plato gives us an opportunity to have a new look at the basic strategies of his philosophy.