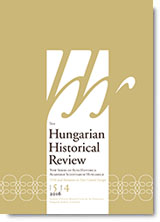 Summary/Abstract: The import of cloth was one of the most important sectors of international trade throughout the European Middle Ages and early modern period. Its history and impact on medieval economies have been studied by scholars for quite a long time, creating the impression that there are no new sources waiting to be found. Improved methods of archaeological excavations, however, have produced data significant to the international trade connections. This data was hidden in small leaden seals that were attached to the textile fabrics indicating their quality and origin. In this paper, I examine the cloth seals originating from Bavaria that have been found so far in the Carpathian Basin and compare the information provided by them with that already known from the available written sources. This comparison leads to several important conclusions. Perhaps most importantly, the dating range of the known cloth seals can be convincingly limited within the fifteenth and sixteenth centuries for all the nineteen known textile production centers. Also, the cloth marked by these seals indicates that some serious changes arose in textile consumption at the end of the Middle Ages. In this study, I identify some new places of origin not mentioned in the written sources and trace their distribution in the medieval Kingdom of Hungary.