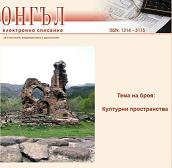 Summary/Abstract: The present research consists of introduction, four chapters, conclusion, bibliography (92 internal and international law acts, 125 titles – 112 in Cyrillic, 13 in Latin and 28 other sources) and 11 figures. The introduction part reveals basic ideas of the research, as well as some terminological matters. The work traces back the development of the governing models for protection of cultural archaeological heritage in Bulgaria and their place in the system for protection of national security in different political and economic conditions (1877-2011) and, in comparison with the European practices shapes opportunities for increasing of their effectiveness in the context of membership of the country in European Union – a territory of freedom, justice, fairness and a community of cultural diversity in terms of further globalization. The choice of archaeological heritage is based on its international recognition as national and international wealth, which requires adequate protection. The actuality of the research is based on: the large scale of the crimes against the archaeological heritage, which are also threat to the human rights and interests of the civil society; the necessity of actualization of present model for protection in Bulgaria; a certain underestimation of the importance of the cultural heritage and inactivity in the state protection policy; a presence of researcher`s interest in the history and contemporary condition of the models for protection. The methodology of the research includes comparative, analytical and systematic approach; here are used the methods of studying and analyzing of documents and the expert evaluation and data content-analysis. Chapter I - Introduction to the Problematic Matters Chapter II - Establishing and Formation of the Legislative and Institutional Basics of the Governing Model for Protection of the Archaeological Antiquities in Bulgaria (1877-1944 ) Chapter III - Governing Model for Protection of the Cultural Archaeological heritage in Bulgaria after the Second World War (1944-1989) Chapter IV - Development of the Governing Model for Protection of the Cultural Archaeological Heritage in Republic of Bulgaria in the Transition Period to Establishing of Democratic Society (1989-2011) According to empiric researches by methods of expert evaluations and data content-analysis, on expert level have been proposed: - a new concept definition of model for protection of cultural archaeological heritage; - terms of reference to improve its effectiveness, including the activity of law enforcement institutions like the Ministry of Interior. The theoretical and practical-applied results of the research aim to support the improvement of the governing model for protection of archaeological heritage in the context of Bulgarian membership in the European Union.