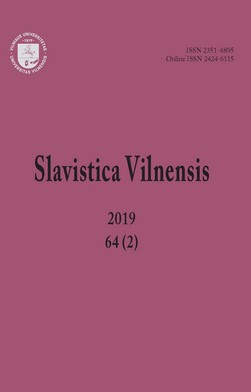 Summary/Abstract: The interaction between the Ordinary and the Versed synaxarion began almost immediately after the latter was translated in the first quarter of the 14th century. The present article focuses on samples of readings from the Versed synaxarion that found their way into versions of the Ordinary synaxarion. The author raises the question of whether the readings from Moscovite Rus versions of the Synaxarion were integrated into the versions characteristic to the Kyiv Metropolitanate. An indepth study into the composition of the versions of the Synaxarion deriving from the Grand Duchy of Lithuania and, subsequently, the Commonwealth of the Two Nations, has made it possible to give an affirmative answer to this question. The specific version of the extended edition of the Synaxarion copy written by the local scribe Symeon in 1621 in Rychagov Village, Lviv Region, Ukraine, later transferred to the Krekhov Monastery and currently stored in the Lviv National Scientific Library, MV 1267, has been found to contain a number of didactic articles and individual hagiographic texts derived from the Moscow version of the Versed synaxarion. The Rychagov synaxarion was also checked with some other synaxaria and hagiographic collections from the Commonwealth of the Two Nations. During their work on these sources, the book scribes were chiefly interested in the new sermons they used for creating the unique and rich didactic section of the synaxarion No. 1267.