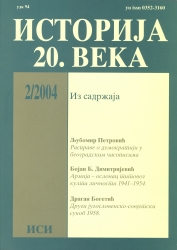 Summary/Abstract: Ten years later, the same contents, typical for the sharp confrontation between Yugoslavia and the USSR in 1949, characterized the second Yugoslav-Soviet conflict, as this sudden deterioration of relations between Belgrade and Moscow in 1958 was often named in the West. However, this time, the conflicts were less intensive and less dangerous than the previous one but their essence and contents were mainly the same. The cause for the renewed discontinuation of cooperation between the states and parties of Yugoslavia and the USSR was Yugoslavia’s rejection to sign the Declarations of 12 communist parties at the gathering in Moscow held in November, 1957, and the adoption of the Program of the Union of the Communists of Yugoslavia (SKJ) at the Seventh Congress in Ljubljana in April, 1958. The main reason, however, of the conflict between Khrushchev and Tito appeared due to the total failure of the Soviet action to get Yugoslavia back to the group of socialist states and persuade the Yugoslavs to renounce the politics of avoiding firm alliance with any of the two opposing blocks. All the Khrushchev’s illusions of the Yugoslavia’s return to the socialist circle definitely dispersed when the Yugoslav communists, instead of signing the declaration that had the character of the constitutive act of the new Cominform, adopted the Program of SKJ, i.e. the document of completely different content, with stress on communist parties’ independent choice of their path to socialism.

Pogoršanje jugoslovensko-američkih odnosa posle Prvog samita nesvrstanih zemalja u Beogradu The Decline of the Yugoslav-American Relations in the Aftermath of the First Summit of the Countries of the Non-Aligned Movement in Belgrade 2006 ARAPSKO-IZRAELSKI RAT 1967. GODINEI JUGOSLOVENSKO-AMERIČKI ODNOSI ARAB-ISRAELI WAR OF 1967 AND YUGOSLAV RELATIONS WITH UNITED STATES 2008 Jugoslavija i Sad – Od Sporenja Ka Saradnji Relations During 1963 Yugoslav-American Relations During: From Disputes To Cooperation 1963 2009 Међународни положај Југославије у време првих спољнополитичких акција Џонсонове администрације The International Situation of Yugoslavia at the Times of the First Foreign Policy Actions of the Johnson Administration 2009 Evolucija sovjetskih gledišta prema politici nesvrstanosti The Evolution Of The Soviet Standpoints On The Non-aligned Policy 2012
2022 © CEEOL. ALL Rights Reserved. Privacy Policy | Terms & Conditions of use
ICB - InterConsult Bulgaria ver.1.7.2509