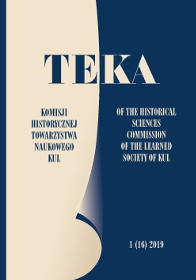 Summary/Abstract: One of the biggest genocides in the history of Spain has been the religious persecution during the Second Republic and the Spanish Civil War. Nowadays, the politically correct discourse tries to present those facts as a result of actions undertaken by uncontrolled people in a situation that was very difficult for the authorities to monitor. The truth is very different. Assassinations, tortures, rapes were committed in the majority of cases by militias formed and supervised by Republican authorities.