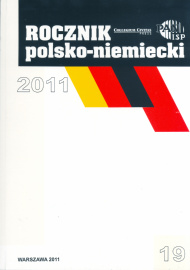 "Praca jest czasochłonna, monotonna i nie przynosi konkretnych rezultatów" – nasłuch wywiadowczy Stasi w PRL w latach 1980–1981
“The work is time-consuming, monotonous and it does not produce any specifi c results”. The Stasi’s intelligence monitoring in the PPR in 1980–1981

Summary/Abstract: The text a empts to analyse the GDR Ministry of State Security’s offensive operations using the instruments of radio-electronic intelligence against the PPR in 1981. The situation in Poland, the emergence of Solidarność and possible, uncontrolled spreading of a wave of democratisation onto the East Germany’s territory as well, drove the leaders of the latter state to undertake actions aimed at ensuring it access to information on the on-going situation in the PRP. Apart from the data obtained officially, they also intended to resort to independent methods for its acquisition, most of all by employing the secret services. The author focuses on just one aspects of such operations, that is, radio-electronic intelligence. Apart from describing the structure and the working methods of the MfS’ III Directorate responsible for this type of reconnaissance, he presents the guidelines received by this organisation, its modus operandi and forms of work both on the territory of the GDR and the PPR, as well as on that of the other states. He also points to the effects and all the problems resulting from implementing intelligence operations, including those in the context of official co-operation between the secret services of the PPR and GDR. According to the author, the manner of carrying out offensive MfS operations by radio-electronic intelligence allows for a certain scepticism with regard to the thesis that the GDR services had unlimited opportunities to work in Poland. Based on the available archive sources, the observation that the MfS found it difficult to process and apply information obtained as a result of the services’operations, is warranted. The shortage of competent staff can be clearly seen and not all the available technical instruments could perform their role. What was also important was the lack of understanding at the MfS of the different philosophy of life in the PPR, which determined the reception of its image obtained from the monitoring in place. Moreover, archive searches provide circumstantial evidence indicating that the Polish counter-intelligence was aware of what type of operations were being carried out by the GDR against Poland. The need for co-operation between the MfS and the MSW in the context of the radio-electronic intelligence against other states, as well as the awareness of the risk related to the possible discovery of illegal radio-electronic operations, led to their closing down. This failed, however, to change the belief that the fundamental operating principles of the secret services are to distrust one’s partners and to protect one’s own interests.