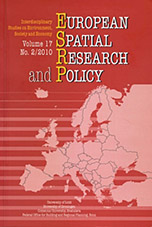 Summary/Abstract: In 2009 and 2010 Poland and Germany are celebrating some important anniversaries – 20 years of the first free elections and the fall of the Berlin Wall. These jubilees inspire research aiming at taking stock of developments having unfolded over this time. Since the economic cohesion is high on the EU agenda, examining international and interregional differences seems an important research task. This article aims at evaluating and comparing σ-convergence (diminishing discrepancies of GDP p.c.) in Poland (1995–2005) and Germany (1992–2006) on three NUTS levels. Preliminary results point to inequalities regularly diminishing in Germany, however, growing in Poland. A tentative reasoning suggests that increasing values of regional differences observed in Poland might be a temporary phenomenon.