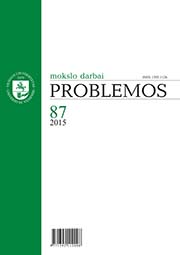 Summary/Abstract: The paper considers interaction of the theories of moral legitimation with the concepts of communicative action and negotiation in consideration of critique of classical ideals of rationality and Habermas’s weak attitude of transcendental pragmatics. The aim of the paper is to show the importance of epistemological interpellation of moral legitimation and its procedures for contemporary ethics and development of other moral traditions. Ideas and conflicts of legitimation are analysed with regard to considerations of Weber, Arendt and Habermas. The paper supplements the theory of communicative action and discourse, as precondition of a normative, with the concepts of moral temporality, world event, and responsible action regarding contemporary post-structural philosophy. The main thesis of the paper is that, according to the critical theory, moral legitimation is supported by possible universal idea of communicative action, negotiation and sufficiency, which depend on the processes of multiplicities. The arguments of the paper aim at the critic of classical ideals of rationality, theories of ranks and sanctity, accumulation of symbolical capital and power of institutions. Needs of transcendental principle of communicative action, negotiation and temporality are argued for by examples of the development of civilizational and cultural diversity, growing significance of personal and group dynamics, and continuous origin of new conflicts. The article consistently rejects the idea of foundationalism and substitutes it with the notions of politics of sufficient legitimation, openness and group dynamics.