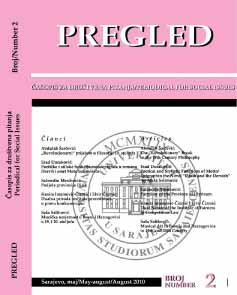 Summary/Abstract: That there is a completely legitimate binding to Heidegger, the counter direction of traditional philosophy in Loewith’s, is certain. The criticism of Hegel especially comes to the light in the book entitled “From Hegel to Nietzsche” andmeets theHeidegger’s criticism of the western metaphysics, of the absolute conscience’s speculative ontology, and of absolute knowledge/comprehension, absolute transparency and absolute availability. It reduces itself on “factual, final and historical human existence”. As soon as some philosophy emphasizes certain (counter)direction towards philosophy in general, it has already found in that origin its kinsmen, namely in Kierkegaard, and Marx, in Nietzsche and Heidegger; within the attack against the metaphysics taken from tradition which was doubted even by W. Dilthey, in his own manner. In every sense, Hegel represents the end of German classical philosophy’s completing. In his youth, Loewith had collected his all early Karl Marx’s philosophical papers researches in the treatise on M.Webber and K.Marx in 1932. It seems that he can be commended for his clear opinion. He finds Webber’s existential relativism, favored by the post Hegelian school, to be philosophically unacceptable, particularly nowadays, but even Marx’s idea on man as social and being whose task (or essence) has been speculated under the shadow of Hegel’s speculative ontology of the absolute conscience – to “implement the general tendency of the world’s history”. We cannot avoid the content of that critical premise. We must not either disregard his other non-Marxist studies of Marx. They are congruent with Loewith’s critical treatises on the relationship between philosophy and theology “regarding the Bultman’s encroaching of Heidegger’s ‘human existence’s analytics’7). He found the moment of unification in assumption that both of them had accepted Kierkegaard’s idea of truth becoming true only when those who “exist „accept it subjectively. That is why Loewith thought that in 1920s, a new pathos of practice existential “decision” induced by Kierkegaard and Marx in their own particularway against institutional Christianity and civil society in general, had achieved actuality in the century fortified in its anxiety, rebellion and expulsion. He was ultimately leaning to theological, philosophic and politic decisionism; led, and of course lured to it. Hence he was highly motivated. His polemic against “Politic Decisionism” by C. Schmidt appeared (under pseudonym) in 1935 testify on his motivation, also including a treatise on the political implications of Heidegger’s philosophy of existence, published in 1946 in France.