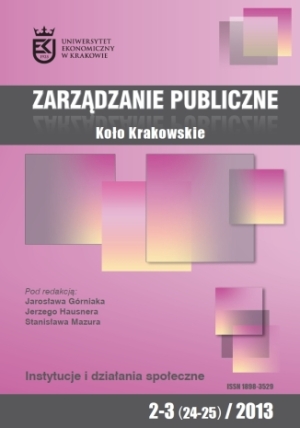 Summary/Abstract: Th is article consists in theoretical considerations on the infl uence institutions – especially informal institutions – have on human behaviour. Indebted to the works of such thinkers as Douglass North and Daniel Khaneman, the author points to analogies between the understanding of the nature of informal institutions and the more psychological take on human decision-making. Th is latter philosophy claims that as humans we are very much limited in the quantity of real-life situations in which we can actually use a rational mode of decision-making (or what we consider to be a rational mode of decision-making). Th e mode implies clear understanding of goals, decision criteria, and the evaluation of possible options with them in sight. Much more often we act on so-called intuition, i.e. a set of ready-to-be-used solutions (or habits) triggered by memory of similar decision problems solved in the past. Th e author argues that, in a discussions of the institutional context of public policies aimed at the stimulation of development, the focus should not be on formal rules which create the body of formal institutions. A much bigger potential of change is to be discovered in sophisticated policies which identify informal institutions adequate for a given behaviour and try to infl uence exactly them.