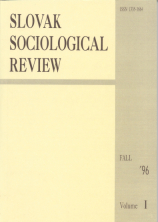 Summary/Abstract: This study analyses the shifts in the political landscape of Slovakia after the 1994 early elections. It outlines the attitudes of the population toward economic development, as well as trends in Slovak-Hungarian relations. The last chapter is devoted to the perception of foreign policy and issues of Euroatlantic integration. The study is based mainly on surveys conducted by the agency FOCUS - Centre for Social and Market Analysis in Bratislava. (In the period of December, 1994 through September, 1996, the agency FOCUS carried out nine representative surveys. Standardized face-to-face interviews were conducted by trained fieldwork interviewers. Quota samples comprised of 1,000-1,200 respondents. All samples were representative with regard to gender, age, education, nationality, size and place of residence. This study presents only some of the findings of these surveys. For other findings see [Current Problems of Slovakia (December 1994) 1995; Bútorová et al. 1996a; Bútorová 1996].