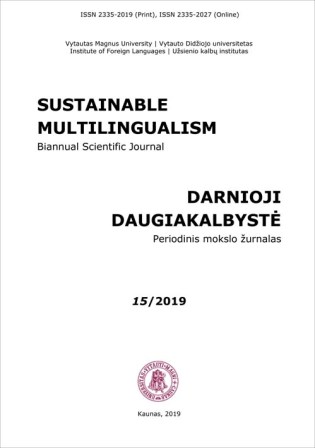 Summary/Abstract: Translators, linguists and translation researchers often have to deal with subtle and sometimes complex syntactical aspects involved in translation. Properly conveying the structure and rhythm of a sentence or text in another language is a difficult task that requires a good understanding of syntactical aspects of both the source and the target language. The morphology of Lithuanian verbs and nouns, and specially its system of declensions and cases, without any doubt facilitates a relatively flexible word order. Many linguists also agree that word order in the Spanish sentence is also freer than in French, English or other modern languages. It has often been said that Spanish has the most flexible word order of all Romance languages. However, Spanish word order is by no means as free as in Lithuanian. A comparative study of Lithuanian texts and their translation into Spanish allows a better understanding of the syntactical differences between both languages. This article examines a case of syntactical inversion in Lithuanian: the displacement of the direct object and its location at the beginning of the sentence, and the translation of such sentences into Spanish. In Spanish the direct object usually follows the verb, except in the cases when that function is carried out by pronouns. In order to displace a direct object to the beginning of the sentence, Spanish syntactical structures should be used. In this article two stylistically different Lithuanian texts will be compared with their Spanish translation so as to identify the linguistic means used in each case. A comparative analysis of different types of texts is useful to reveal the Spanish syntactical structures chosen by the translators as well as certain tendencies in each specific context.