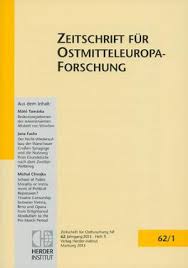 Summary/Abstract: This article argues for the integration of environmental perspectives into historical studies of territorialization. Using the case of the Western Expedition for the Drainage of Marshlands in Polesia (1873-1902), it shows that the transformation of the environment was one of many means by which the government of the Russian Empire sought to integrate the imperial territory and to develop regions that were considered backward. Three factors shaped these territorialization efforts in Polesia: firstly, the desire to foster economic development in rural areas; secondly, the role of the state as landowner; and, thirdly, a widespread consensus regarding the economic uselessness of wetlands. The canal network built by the Western Expedition improved conditions for commercial forestry in Polesia and connected the region to important transport routes. Yet, canal construction and river straightening measures were contested, as they subordinated existing land and water use practices to the interests of the central government. The example of the Western Expedition demonstrates that the concept of the “ecosystem engineer” can help to analytically grasp the ecological dimension of imperial rule. At the same time, the case is symptomatic of a new paradigm in the relationship between state and nature in modem Russia: Environmental change was not a side effect of the state’s territorialization efforts, but an actively applied means of spatial consolidation.