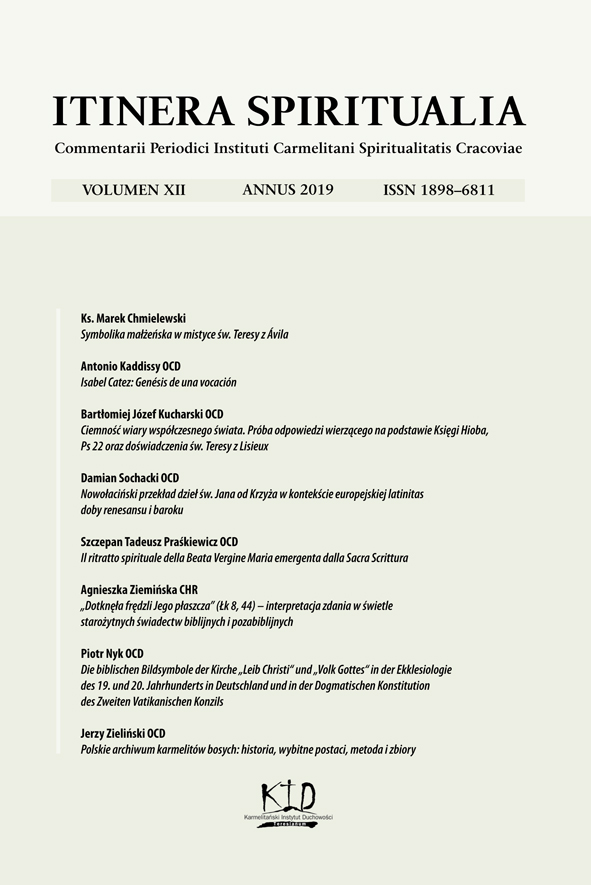 Summary/Abstract: Touching Jesus’ garment by a woman suffering from a twelve-year discharge of blood rendered an uncontrolled flow of power (δύναμις) from his body and cured her. Did the fact that the woman’s touch concerned this specific part of the robe of the Master of Nazareth have some meaning? Bearing in mind the law of wearing tassels upon the hem of the garment (Deut 22:12) as well as the prophecy from Zach 8:23, we follow the history and the meaning of this appendage to the garment. It is certain that tassels upon robes were not an idea that originated in Jewish culture. We find evidence of garments with this kind of adornment on two Minoan seal stones from around the 17th c. BC, Assyrian bas-reliefs (9th c. BC) and also on some Egyptian artefacts (starting from around 15th c. BC). They are visible as additions to the robes of both important people (king, priest) and deities. In many cultures, tassels upon the robe gave a special status to the person who wore them. They served as seals and as such they constituted an alter ego of a person. Touching or grasping the fringes of someone’s robe gave the owner an aff ection and gave him that person’s power. It seems that the Jews, to the preexisting custom of wearing this ornament, added, following God’s command, a specifi cally Jewish order to put in the tassels a blue thread (Num 15:38). Wearing the fringes widened with a new dimension – they were supposed to remind people of God’s commandments and his presence. In the case of the sick woman touching Jesus and also in the passage of Matt 14:34–36, where the sick people ask whether they could touch “the fringes of his cloak” both dimensions (ethnic – power, and specifi cally Jewish – memory of God commandments) are significant.