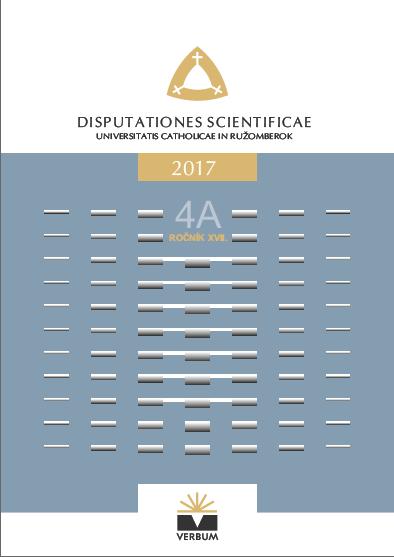 Summary/Abstract: A health from the point of view of a physical, a psychological and a lifestyle of a human being are currently being put into a relationship that affects each other. Therefore, listed study focuses on identifying selected lifestyle factors of an adult population from a mental health point of view. The monitored group consisted of 742 respondents, middleaged, from the southern districts of Slovakia, including 403 of women and 339 of men whose choice was deliberate. From the point of view of data acquisition methods, a method of content analysis of the study of literary sources of various important foreign and domestic databases was used, as well as a survey method, which was an anonymous standardized questionnaire, consisting of 60 questions. The questionnaire was based on primary determinants of a quality of a life and a lifestyle of the monitored group. Partial outcomes point to a fact that a stress and stressful situations are significantly (χ² = 60.7204, p < 0.01) better managed by male population (38.64 %, n = 131) than women population (20.10 %, n = 81), as well as a fatigue. As moody was reported more by women (47.39 %, n = 191) as men (18.58 %, n = 63). At the same time, significantly (χ² = 54.6378, p < 0.01) more women (58.31 %, n = 235) than men (34.51 %, n = 117) mentioned a migraine. Similarly, a cervical spine pain was reported significantly (χ² = 48.592, p < 0.01) in higher percentages by more women than men. Problems with a sleep significantly (χ² = 24.366, p < 0.01) was reported more by women (13.86 %, n = 47) than men (22.58 %, n = 91). At the same time, we also found a significant relationship (r p < 0.01) between the fatigue and the cervical spine pain.